Is there a ending to this other than you getting eaten?

There is no ending yet.

ok thanks for replying so fast!

so unity5games, did you ever fix your pc?

I need a new pc, fortunately I saved all my projects. I'll try to open the project on my laptop and if everything goes well I'll add press enter to play button.

if it works, maybe the raptor one after?

it works! uploading it now.

I'll post raptors (in the kitchen) on this site when I polish the game.

I'll give it a try

But yes it is a nice game

How do you play it on a Chrome Book

Mine has reallly low fps! How do i fix it?

Hi! I love all the Jurassic Games so far but what you really need to make is a Game where you have FREEROAM through the lockwood manor where your being chased by indoraptor and you need to make it really cool and realistic but also make it playable for laptops cuz this game is to realistic for my laptop :( but yeah making a freeroam lockwood manor game with indoraptor would be the best thing ive ever seen!!!

Hey i played your game for my channel :D

This is so WELL DONE!!  I'm still waiting for the ENTER key to work so that I can play on the VIVE in VR as well!   Can you please make this possible soon??

It's a very good start. However, there are some big immersion breaking things to address, if you intend to update the game.

1. I do love the way you have the feet animated in the way they press against the ground. Very impressive. But the way the walk animation slides out of pace is very immersion breaking. On top of that - and a much more difficult fix - is getting the t-rex to have proper turning animations. The best example of big dino beasts having amazing walking animations is Monster Hunter World, but that's gonna be a pain to try and mimic... but worth the effort.

2. The roads being blocked by forestry. It looks bad. I'd say get rid of that and make it so that they're possible exit points if you play right. Maybe can have one blocked off by fallen trees and rubble. Can make it so that if you hit a certain distance without being seen, you auto exit. But if he sees you, there's just a bunch of road to run down till he eats you.

3. AI pathing. Had the t-rex trying to walk through the cars to come sniff me.

4. Can clip through his feet. Once he has his back turn, you can basically do all sorts of goofing around, including hiding inside of his legs.

5. Can sprint to the exit for a clean getaway during the t-rex's opening animation. The best way to solve this would be to make it so the player can't leave the car until the animation is finished.

Again, what you have is a great start so far. With some more work, this can truly go great places. I have more critiques, but its more of smaller stuff.

This was such a cool game! Ive been wanting to play this game for so long and it lived up to my own hype :P

P.S. I found out you had a made a similar game but with the raptor kitchen scene. Any chance, you could redirect me to that game page as I couldn't find it on this site.

Thank you! Soon I will post a new update.
HERE is the raptor kitchen scene, enjoy :)

I ´m a Houdini FX artist/TD, i believe i can help you (for free, i love JP!) with some things, on dinosaur mesh deformation, and all sorts of simulation, including, bone sliding, muscle volumes deformation and jiggling, and splashes, rain, water drops, mud simulation etc...

WOW, this game is amazing...  I need a full version of this :D   You should make a Back to the Future simulation like this.

Reply
Raithias1 year ago
I was blown away how well this game was made! I enjoyed the reenactment of the scene. A couple of things that I think would make it better would being able to interact with the second explorer. Being able to do more things in the explorers IE honk the horn maybe or, turn on the radio.Turn on/off the headlights. I've seen some others play your game and, it doesn't look like there is a way to win. It's disappointing would be nice if you made it to a certain gate or, did something that would be a victory of winning against the T-Rex instead of try to run away until it decides to eat you. Super impressive what you have right now though!
Reply
CargoFullBRO1 year ago

Hi, this was a very good game you made, but you should have added the flare that dr. Grant and ian throws, and after you throw the flare you half to get to the other side that leads out.

AWESOME... but, is there a way to escape or we need to die forcefully?

That T-rex was very detailed and real-looking! It was short, but very enjoyable.

Twas nice seeing the dinosaur up close and personal. Seeing the way it interacted with the car with its increasing agitation when I was hiding was both a scary and fun  experience for me.  I just wish that this wasn't just a recreation of a movie scene as I would've loved to see it be longer, and maybe have an ending goal in mind as I can see how fun it'd be hopping from car to car to escape a dinosaur (or dinosaurs if that version were to be made).

Overall, great job on this~ It's a nifty game.

hi, when ever i try to download it, the file always sends me to "open file with" and i try to find something but when i close it the file automatically opens file with internet explorer and i won't open when i  click on "open" is there any way i can fix this? if so thank you, because i have wanted to play this game for a long time.

When I download this I get a message saying g folder 'T-Rex Breakout Demo_Data' is missing.

I hoped this help :)

This is great ! I am waiting for more and VR (dualshock) Thank You 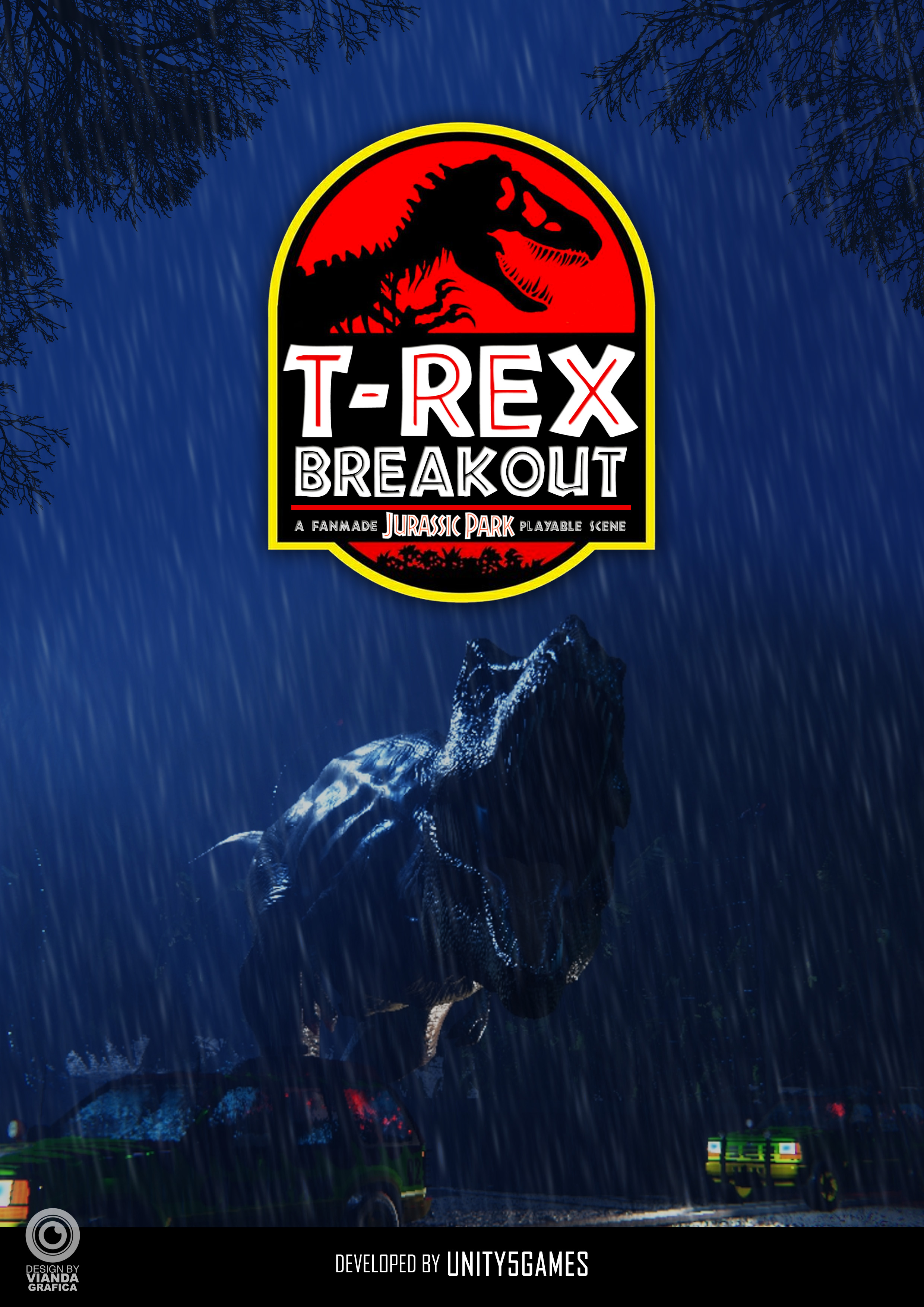 Hi Unity5games! This is a gift for you :-D Thanks for this awesome "playable scene" ;-) I've designed more that I want to send you via mail (if you want). Thank you very much!

why cant i install it

wtf year is this? winzip? lmao

i look to a real gamesnow.

theres a few things that could be improved; like the fact that in your game, the t-rex's iconic escape roar doesnt have the t-rex's mouth open as wide as in the film. Theres also the fact that you can continually loop the change seat animation by changing to the seat you're already in. The feet on the rex also glitched at one point, but i think i just had the graphics setting higher than my computer could comfortably handle at the time - so thats on me.

that being said, this is astoundingly beautiful and terrifying as fuck. 10/10, would get eaten by t-rex again.

Reply
Clovilah1 year ago(-1)
Jack played your game and loved it, congrats!
Reply
unity5games1 year ago(+1)(-1)

Interesting game. It looks great, just wish there was more to it.

dude..... please do the original version....the demo was sooo gooood. You have a really good potential use it. Maybe you can make a game like this,  for the virtual reality. I know is hard, but you know. WITHOUT SUFFERING NOT GLORY

hey unity 5, did you get your pc fixed yet? Still dying to play this in vr!

I will gladly donate a few bucks to this cause ;)

I still haven't tried this as I want to experience this only in VR.

Very soon! :) I'm also dying to make more of this.

It doesn't take that long to make it VR. You just need to download SteamVR in Unity and apply a camerarig into the scene.

Build again, and it's done

Have you tried with VorpX  modifier?

I don't like vorpx. Your game would look and run better if it ran natively in vr without vorpx. It's already does but like I've said, I can't get past the menu

Reply
RH Game On1 year ago

Great job! Would love to play more if you add anymore to it! Keep up the amazing work

LOVED IT!!!!! I wish there was a whole game like this. Super cool!

Hey! Really love your both playable scenes !! They are very very cool :-D How can I communicate with you in private?

What do you mean by "both playable Scenes"? There is another game like "T-Rex Breakout"???

Yes! There's a Kitchen one: http://www.mediafire.com/file/2gichqo2qlss4h4/Raptors_UpdateV2.zip

wow! Thank you very much! This is so much fun! I really love it!

Make this on VR. please!

Cool game, but there is a weird bug with the car chairs. You can keep moving to the left chair (even if you are already on the left chair...). Then you get magically teleported back.

I have a laptop and I did everything right with getting the game downloaded and I even did steps I followed online to find out how to get a more smooth experience or a faster frames per second, but the game is still choppy or low on fps. Any helpful tips on how to fix that? I kinda wanna find a way to make a Lenovo laptop work with these games

Have you tried lowering screen resolution and graphics quality in configuration window before you press play? It'll look a bit ugly but it may help to get faster frames.

Any possibility of doing a build with VR support? Unity XR settings can use Oculus  SDK and OpenVR.